Defective Takata airbags have been linked to multiple deaths and over one hundred injuries. When deployed, the defective airbag may shoot metal fragments into the occupants of the vehicle causing serious injuries. Millions of vehicles in the United States have been recalled in order to replace the potentially defective airbags. If you or a loved one has been injured by a defective airbag, please call our firm. 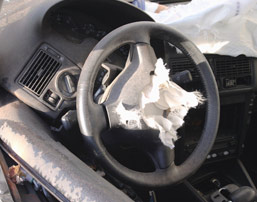 The defective airbags have faulty inflator and propellent devices which may deploy improperly after a collision. The defective devices will cause the airbag to explode and shoot metal fragments into the vehicle. These metal fragments cause severe upper body, facial, and neck lacerations. These injuries are much different than the cuts and bruises that may be sustained from a normal airbag deployment. In some instances, the lacerations have been severe enough to cause the victim to bleed to death.

If you or a loved one were in a car accident where the airbag exploded and suffered any of the following injuries, please call our firm:

Please click here for a complete list of all recalled vehicles that may have a potentially defective Takata airbag.

Takata Corporation is a Japanese company who manufactures and sells motor vehicle seat belts, airbags, steering wheels, interior trims, and child restraint systems. The company was established in 1933 as a textile manufacturer and after being inspired by the use of seat belts in American cars it began to manufacture and produce its own seat belts. Net profit for the company for its 2015 1Q was almost $25 million.

Eligible for a Takata airbag Lawsuit?