In March of 2012, the U.S. Food and Drug Administration (FDA) issued a Class 1 recall of Fresenius Medical Care’s GranuFlo and NaturaLyte dialysis drugs. It was discovered that use of the drugs could lead to an overdose of bicarbonate in the body which can cause serious heart problems and even death. An internal company memo showed that Fresenius knew about this issue but failed to warn the thousands of dialysis clinics around the country using its products. 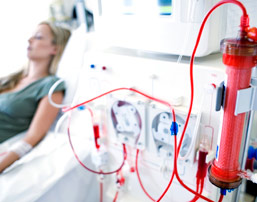 GranuFlo and NaturaLyte Side Effects

In patients with renal failure, dialysis takes the place of the kidneys in removing waste from the blood. Hemodialysis cleans the blood by running it through a type of filter outside of the body. During this procedure an alkaline substance, bicarbonate, is given in order to neutralize acid that has built up in the blood. Fresenius Medical Care’s GranuFlo and NaturaLyte products perform different functions in dialysis, but they contain an ingredient called acetate that the body converts to bicarbonate, and they contain more of this ingredient than rival products. This can lead to an overdose of bicarbonate in the body, which has been shown to lead to serious heart problems and even death.

If you or a loved one has suffered any of the following side effects after dialysis please call our firm:

In 2012, the FDA issued a Class I recall for Fresenius Medical Care’s dialysates, GranuFlo and NaturaLyte. The recall was necessary because their use could lead to elevated bicarbonate levels in the blood. This condition could eventually lead to metabolic alkalosis, which, if left untreated may cause cardiac arrest. As a result, the FDA stated the product could cause “serious adverse health consequences, including death.” According to its website, the FDA defines a Class I recall as “a situation in which there is a reasonable probability that the use of or exposure to the product will cause serious adverse health consequences or death.”

Fresenius Medical Care is the largest provider of dialysis products and services in the United States. Its dialysis centers treat thousands of patients every day around the country and its drugs are used in other dialysis treatment centers as well. In 2013, the company generated revenues of more than $14.6 billion. The company’s North American headquarters are located in Waltham, Massachusetts.

Eligible for a Dialysis Lawsuit?

Kyros Law Group is dedicated to those who have been affected by Dialysis. If you or a loved one has suffered serious injuries due to Dialysis, then call us immediately at 1-800-961-6827. You will get a FREE & IMMEDIATE consult regarding your potential Dialysis lawsuit claim. You may be entitled to compensation, so do not delay. Your time to file a claim may be limited.

Do not stop any dialysis treatment without first speaking to your doctor.